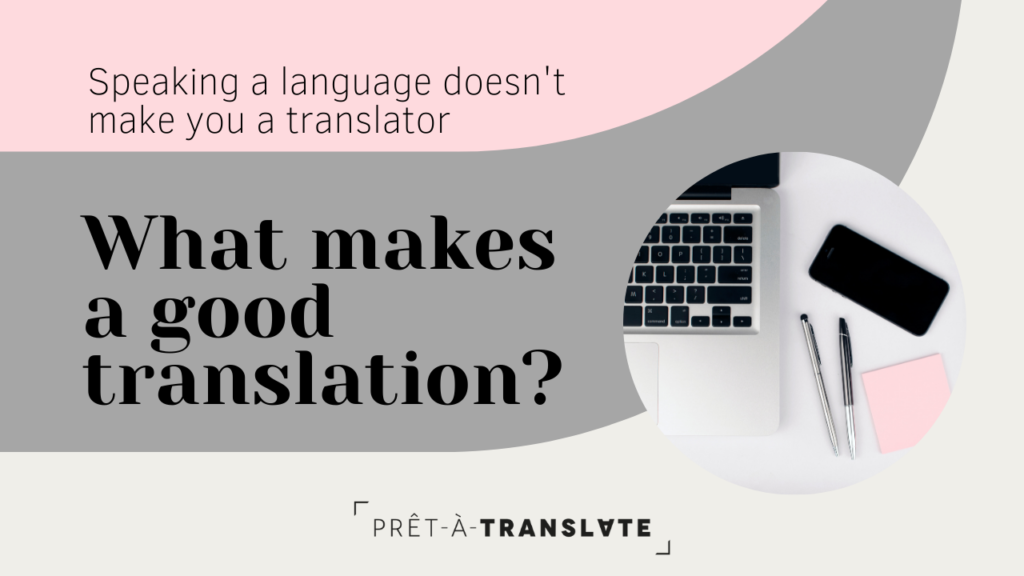 What makes a good translation?

Speaking a language doesn’t make you a translator

I’m sure you have heard a translator say that knowing a language doesn’t make you a translator.

Today I’ll explain to you, with a recent example, why this is so.

A few months ago I saw a series, set in post-World War II Paris. In the Spanish version, a person tells the protagonist: ‘tu hijo está en el 8 de Arrondissement’, which would translate to ‘your son is at 8, Arrondissement’ in English, giving the impression that Arrondissement is a street name.

However, if you have been to Paris, you will know that the arrondissements are the districts into which the city has been divided.

Therefore, this translation is not accurate, as it is not talking about an address, but an area. The correct translation should have been tu hijo está en el distrito 8 (your child is in the 8th district).

Furthermore, the construction ‘el 8 de’ isn’t correct neither when we give an address in Spanish. It is a structure that is often used as a translation from the English ‘8, Oxford Street’, for example. However, in Spain we would say ‘calle Oxford número 8’. I don’t know if it is a resource used in audiovisual translation, so I won’t go into detail on this subject. For me, the cultural error is in the confusion of Arrondissement with the name of a street.

This type of error, which seems insignificant, is what differentiates a translator from a person who speaks a foreign language. Translators, as I have said many times, are cultural mediators, and it is in these small details that we show our knowledge of the source and target cultures, so that our translations are perceived as originals and not as versions in another language.

These errors affect the user’s perception of your product, whether it is a series, a film, a mobile application, or a website, to name but a few of the many products we localisers translate and adapt to our native language.

So, if you don’t want your users and clients in other countries to get the wrong image of your company, work with translators, not with people who know a language.

Need help with your next translation? Contact me and tell me how I can help you.