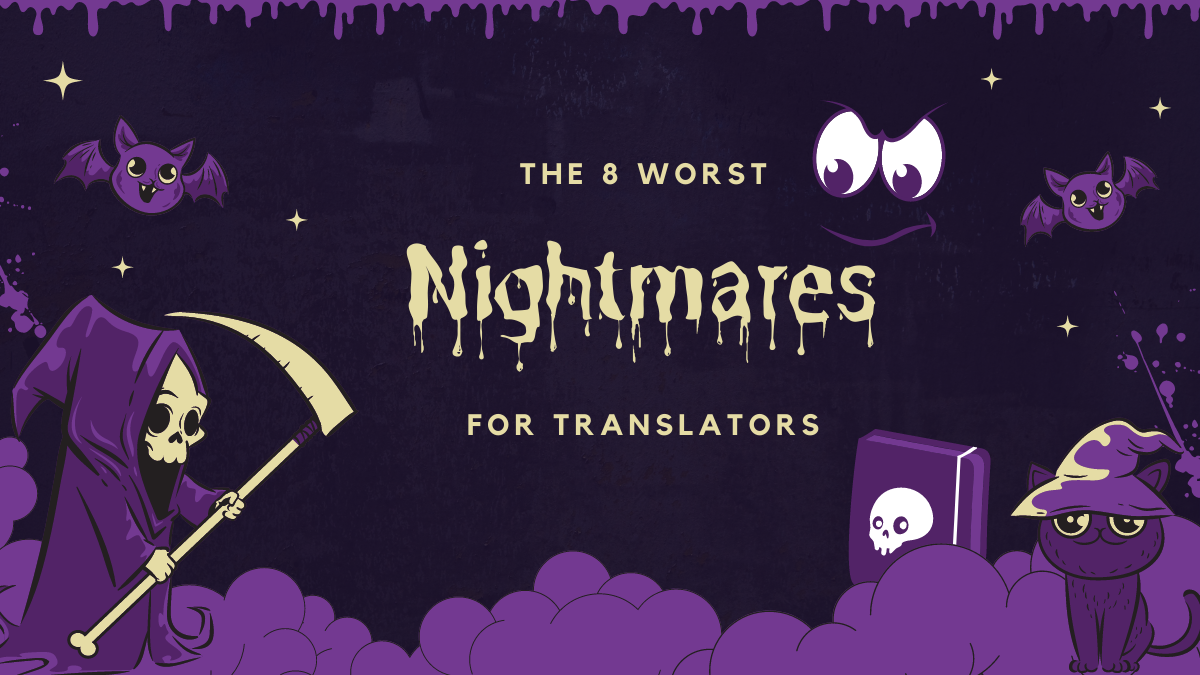 BEWARE: this is really scary!

The living dead, killer clowns, chainsaws and girls that talk to ghosts… TVs across the world are no doubt going to be screening back-to-back horror films this weekend, but translators have to face much more terrifying things than Freddy Krueger on a daily basis.

Today’s post is a compilation of eight situations that give translators sleepless nights, and unfortunately, some of these nightmares do come true.

Technology has brought us a long, long way, but to such an extent that we have become worryingly dependent on it. This summer, I had no Internet for a week and it was the worst thing that could have happened to me (professionally speaking). Urgent deadlines, projects that require a lot of research with the added bonus of poor service from the Internet provider’s call centre and you’ve got the perfect cocktail to bring out the girl from the exorcist that is lurking inside.

That Windows update that you weren’t expecting

It doesn’t matter how you set it up, you always miss something. That one thing that just when you are really in the zone, enjoying that juicy translation, and…  Ta-dah! Your computer restarts and you discover that little old you didn’t save your work.

I say Trados but it could be memoQ or any other CAT tool. They are very useful and have improved a lot, but they sometimes just stop working. They decide when it’s time to have a break, and it is not always the best time.

Wasn’t the translation for Wednesday? But today is… Wednesday!

We have this bad habit, being human and all, and sometimes our memories fail us, we can get confused and get our deadlines mixed up. It’s not common, but it can happen. It happened to me a few weeks ago. I mixed up two jobs for the same client; one was for Wednesday and the other was due in on Thursday. I started with the one that was meant to be delivered on Thursday and the client asked me if the other translation was ready on the Wednesday. I wanted the ground to swallow me up! The best thing to do in this sort of situation is to tell the truth and offer a solution. Luckily, it was a small project and I got to it straight away and the client waited patiently. But I’d rather that it never happen again!

Out of ink and out of ideas

I’m not a sworn translator, which means that all of my projects are sent via email but I do have some colleagues who are. Running out of ink on a Sunday night when you have to print out the translation and deliver it in person first thing on Monday can really make them as jumpy as the main character on Scream.

Receiving files in a language you don’t understand

Translators are humans. And so are our clients. When you work for agencies or companies that have their own localization department, you’re used to receiving packages that include everything you need: translation files, reference files, translation memory, etc. But shock horror when the client sends everything in the wrong language. Normally, this gets resolved quickly when you tell the client, but if you don’t share the same time zone, it can be a nuisance to say the least.

Working with scanned files. Or even worse, photos

We don’t just have to master CAT tools, translators also sometimes use tools that help us process files that need translating, such as OCR programs, code editors or image editors, among others. The problem is that some formats don’t process well, such as scanned handwritten texts or printed texts that are full of scrawled notes. That’s in the best of cases. The worst is when your client sends you a photo of the text via WhatsApp. It is almost impossible to work with this format and that’s when you should charge a higher fee.

This is a challenge, which can quickly become an odyssey. As you know, languages don’t take up the same space. For example, most texts from English to Spanish end up being 20% longer. That’s why we need the product to be internationalized properly and assign more space to translated strings. Can you tell me how to translate “get” in just three letters in Spanish? Come on, I dare you!

Have I scared you? No? What about the worst-case scenario: all of these things happening to you at once?!