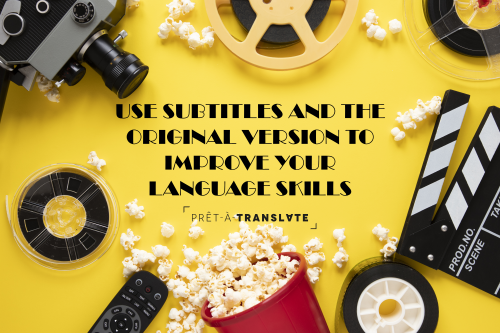 Use subtitles and the original version to improve your language skills

Improve your skills during the lockdown

In Spain, we are already in the second week of confinement. I’m sure that people around the globe are taking the opportunity to watch all those films and TV shows you had on your list for rainy, cold days.

Today, I am giving you some tips to make the most of this tool.

With or without subtitles? Should you use them in your mother tongue or in a foreign language?

The film Parasite has given subtitles the recognition they deserve. I’m glad about that, and I’d like to acknowledge my colleagues who work in audiovisual translation. In my opinion, a dubbed film or with subtitles is neither worse nor better than watching it in its original version. It all depends on your level and what you want to do: enjoy a movie or improve your learning.

If you have a high level, I recommend watching the film in its original version, without subtitles. You’ll probably miss some details, but I don’t think you’ll lose the thread. I don’t mind not knowing each and every word; when I see a movie in its original version, I focus on enjoying it. If necessary, I watch a specific scene again (just like I do when I see it in Spanish and right at the critical moment my dog Frodo starts barking).

If you have an intermediate level, I suggest you watch the movie in the original version with the subtitles in the original language. That’s how I learnt when I was studying, and it worked for me. But you have to keep in mind that, due to the format of the subtitles, you won’t find an exact transcription of what the film is saying, but that won’t prevent you from understanding it.

Which film or series should I watch?

Again, I think our language skills and our way of enjoying the film will influence our decision.

For low and intermediate levels, I recommend watching films or series that we have already seen, or whose plot we know. That way, we can focus more on learning the language without fear of losing the thread, because we already know what it’s about.

If you have a high level and you want to test yourself, take the plunge and do it with a show or a film that you haven’t watched before. I did it with The Good Wife and learned what a subpoena was 😉.

What about you? What’s your method for improving your Spanish or other language skills with films and TV shows? Tell me about it in the comments!