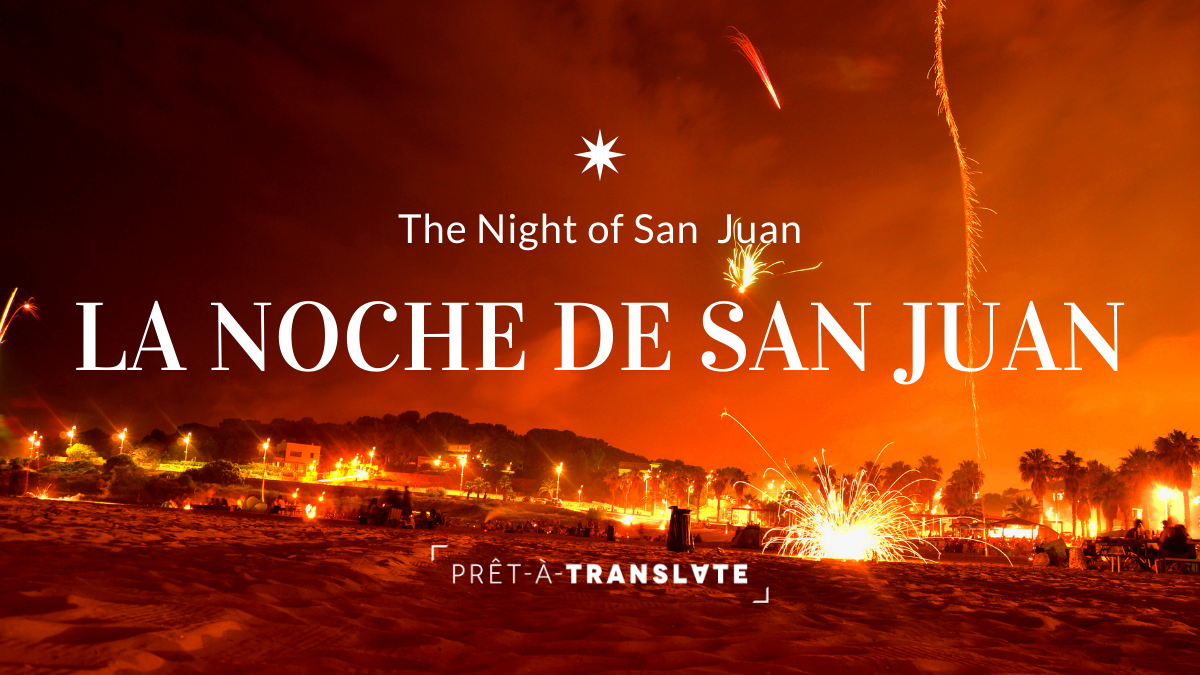 The Night of San Juan in Spain

Although summer officially starts on 21 June, The Night of San Juan in Spain falls on 23 June.

The night of San Juan in Spain celebrates the summer solstice. San Juan (Saint John) also has a religious element that hides its pagan tradition.

The longest day and shortest night of the year come with fire, music, food and luck rituals in Spain.

Expect all-night celebrations on the beaches and inland towns around Spain!

Fire, the star of the night of San Juan

Throughout Spain, fire is the main element in the San Juan celebrations.

As a language and culture expert, I want to share with you some terms you need to know to enjoy San Juan to the fullest. Pay attention because you will find words in Spanish, Catalan and Galician:

Hogueras (bonfires). These are lit on all beaches along the coast of the three seas surrounding Spain (the Mediterranean, the Atlantic Ocean and the Cantabrian Sea) and in inland towns.

Júas. This is specific for Málaga. Figures made of wood, cloth and papier-mâché representing politicians, celebrities or topics from current affairs are burnt at midnight on the most giant bonfires.

In Cádiz, they also have these figures; they are called Juanes (if they are male figures) or Juanas (female figures).

In Alicante, people burn ninots, like the Fallas in Valencia.

Petardos (firecrackers). In Catalonia, children spend weeks saving money for firecrackers and lit them on the night of San Juan.

The noisier, the better! 😉

I have never been a fan of firecrackers since I have two dogs at home. Frodo and Noire (my Dachshunds) are really afraid of them!

When I was a child, I much preferred bengalas (sparklers).

Firecrackers and fireworks are also the stars in almost any celebration in the Comunitat Valenciana region.

Fuegos artificiales (fireworks). Besides the Comunitat Valenciana, in Málaga it is typical to have a fireworks show on the night of San Juan.

Still, I do not remember seeing any in other cities in the Málaga province. I moved to Torremolinos in 2016, and I have not seen fireworks in San Juan.

A tradition in Spain is not complete without food.

In every city and beach, people celebrate verbenas, open-air parties with food and music.

In Catalonia, Cava and Coca de Sant Joan are a must in any verbena.

Coca (be careful, because this is also the short form for ‘cocaine’) is a sort of flatbread dough sweetened with marzipan, custard or angel-hair jam.

Angel-hair is made using the fibrous flesh of the Siam pumpkin, a variety of sweet winter squash ubiquitous in Spain.

I am from Barcelona, so I have often enjoyed the full verbena pack: coca, cava and petardos 🙌.

In Málaga, many people go to the beach packed with their barbecues to cook some fish and sardines. Still, they are not as good as the traditional espetos de sardinas (sardines skewers).

However, I would prefer people enjoyed the espetos in one of the coast’s many chiringuitos (beach bars). Otherwise, the beaches end up very dirty after a moraga (what people in Málaga call beach parties).

In Galicia, sardines are also the stars of San Xoán’s dinner.

Most traditions involve water, fire and wishes, and all of them focus on the year ahead.

Swim at midnight. Take a dip in the sea to cleanse yourself of all the bad vibes and ensure happiness for the next 12 months. Some people enter the water walking backwards, while others jump three waves in a row with their right foot.

This is known as the Paso del Fuego (Passage of Fire).

Its origin is not clear, but it seems it used to be a kind of initiation cult for young men. Now, it is mostly a tradition or a religious ritual; both men (known as pasadores) and women (pasadoras) participate in it.

However, it is mostly reserved for people born in this town or their descendants.

Carry a person on your shoulders to increase your weight when touching the embers and avoid burning your feet.

In San Xoán (Saint John in Galician), also known as the Noite meiga (Witch Night), people burn cacharelas (bonfires in Galician) to protect themselves from witches and sorceresses.

People jump over the bonfire three, seven or nine times (it must be an odd number).

Also, in Galicia, they put a herbs bouquet in water throughout the night, and people use this water to wash their face on the morning of the 24 June.

Some of the herbs in this bouquet are fennel, lemon verbena or rosemary.

If there is one thing we like in Spain, it is a celebration.

I know; it sounds like a horrible stereotype 🤷‍♀️.

Or maybe Spaniards know how to make the most of every minute!

I hope you enjoyed learning more about Spain’s culture. Now I will put the cava in the fridge to enjoy it tonight 🥂.

Have a lovely night of San Juan! May the fire purify you! 🔥