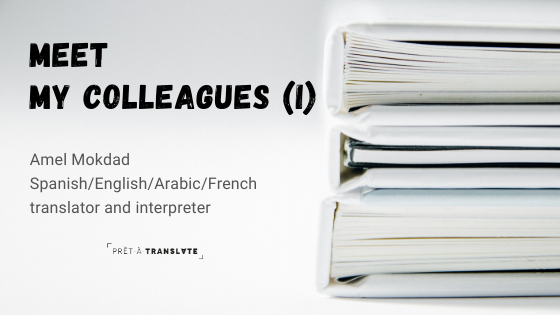 Meet my colleagues (I)

I met Amel a few years ago at a translator meetup that I went to with my friend Eva. Back then, I didn’t imagine that I would end up being freelance and that I would send her translations into French.

Life is full of surprises, and I’m surprised to have happened upon such a professional colleague with whom it’s a pleasure to work.

Algerian born and Malagan by adoption, it gives me great delight to introduce you to Amel in this brief interview.

How long have you been living in Spain? Have you lived anywhere else?

I came to Spain with my family 23 years ago. I had mainly lived in Algeria and spent a little time in France but later spent a year in London on Erasmus. Fleeing the Algerian Civil War, my parents chose Malaga because it is so similar to our home city and they made the right choice!

How did you get into translation?

I was 15 when I decided that translation was for me. Back then, I had already been translating poems from Spanish to French and vice versa in my spare time for a couple of years. I enjoyed it so much that I knew I wanted to be a translator.

As for interpreting, I already started practising at around 13 when my French and Algerian family came to visit us in Spain and I acted as an interpreter between my aunts and uncles and shop assistants or my cousins and my friends.

Later on, when I finished my degree and Master’s in Translation and Interpreting, I did everything I could to make a living from my passion.

What are your fields of work?

In interpreting, I work with a variety of subject matters depending on the event (technical, science, tourism, arts, etc.) which always requires a lot of preparation and background reading. I mainly provide simultaneous and consecutive interpreting for museums, all types of conferences and business meetings. I also collaborate with law firms interpreting at trials and property managers on the Costa del Sol, interpreting at residents’ association meetings.

Are most of your friends Spanish or from other countries?

I have friends of many different nationalities and feel lucky that I can practice all four of my working languages with them. However, I speak French and Spanish with my closest girlfriends as we all went to the French lycée in Malaga.

How does Spanish language and culture influence your work as a French translator? What do you do to make sure you sound natural in your mother tongue?

Spanish language and culture has simply enriched my knowledge and broadened my perspectives in my work as a French translator. When I was a girl, I went through a phase of using Gallicisms when speaking Spanish and vice versa, but as time has gone by, I have grown out of it.

The truth is that apart from reading in French and translating in my mother tongue (which is an exercise in itself), remaining fluent is really thanks to French television channels, my family in Spain always speaking to me in French, my husband who downloads every film in French and my pre-Covid trips to France and Algeria.

What most surprised you about everyday life in Spain?

I remember being really surprised when I saw that it was common to eat toasted bread with tomato and olive oil with white coffee for breakfast. I even thought that it was quite disgusting! I was also shocked at how late lunch was since we would usually eat at midday and have dinner at 8pm in Algeria. It only took me a year to start eating toast with tomato for breakfast and having lunch at 2.30pm.

Living in a foreign country –which is no longer the case for me– is full of enriching personal, cultural and linguistic experiences that I would recommend anyone.

I hope you liked what Amel told us about her life in Spain. If you need help with translation or interpreting jobs into French and Arabic, visit her website http://amelmokdad.com/.