Words from the wardrobe 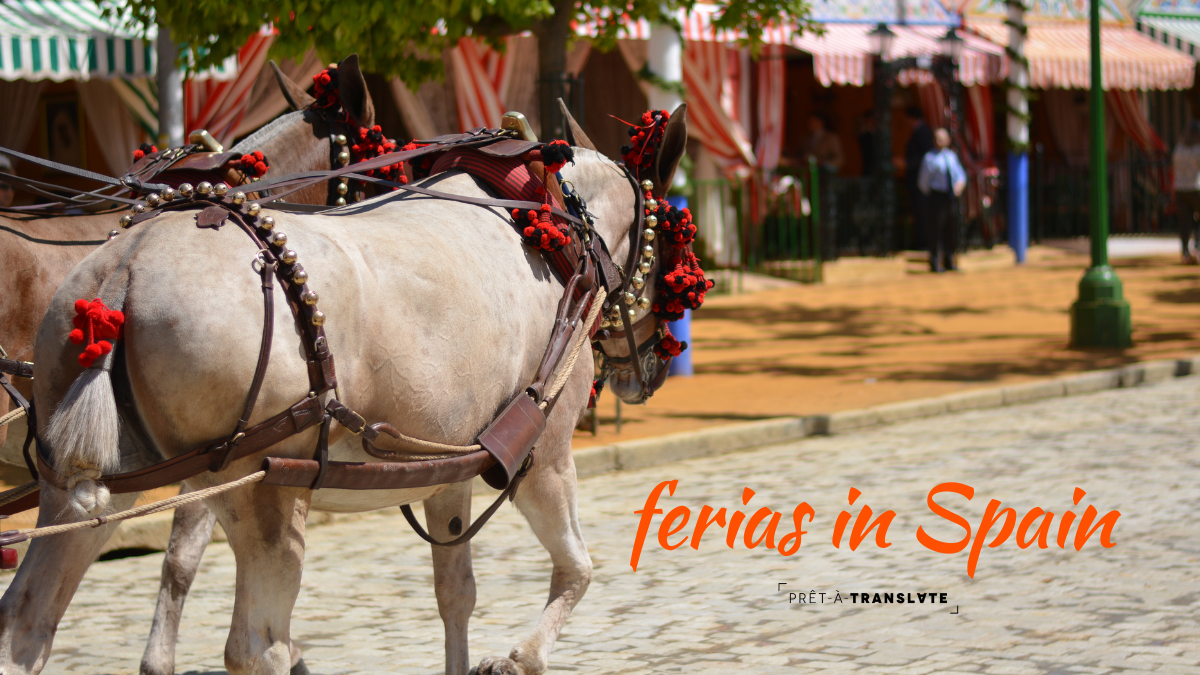 The origin of ferias in Spain

It’s hot in Spain, so I want to talk about some lighter stuff.

Today I’ll tell you about the history of ferias in Spain.

Besides one-day traditions like the night of San Juan, Spain is a fiesta from May to October.

Known by various names, such as ferias, fiestas patronales or fiestas mayores, they are synonymous with joy, reunions, and tradition.

For several days, the bars and restaurants work almost non-stop, and the decorated city streets are a hive of people and good vibes.

Let’s look back at history.

The origin of ferias

Ferias often revolve around the city’s patron saint, such as the Sanfermines in Pamplona, San Isidro in Madrid, La Mercè in Barcelona or El Carmen in many of the coastal towns in Spain.

This saintly origin (like most traditions in Spain) is accompanied (and sometimes preceded) by another event: the livestock fairs, very typical of medieval times.

The Córdoba fair, also known as the fair of Nuestra Señora de la Salud (Our Lady of Good Health), is a good example.

In 1285, King Sancho IV granted the city of Córdoba the royal privilege to host two annual livestock fairs, one of them around May.

Livestock farmers and traders from surrounding villages would come to sell their products, both foodstuffs and handicrafts, at these fairs.

Over time, the merchants’ stalls became fixed structures, known as casetas-tienda, which might be the origin of the well-known casetas of the Andalusian fairs.

Four centuries later, in 1665, two peasants found the image of a small virgin in a well.

A few days after the discovery, a rumour spreads that the water from the well is miraculous and cures the sick and brings health. A pilgrimage of sick people began to take the water to cure their ailments.

And in honour of Our Lady of Good Health, a small chapel was built near the well.

When the hermitage finished, the city celebrated Our Lady of Good Health every May, at the same time as the livestock fair, which had been going on since medieval times.

And to this day.

The Córdoba fair is the last event of what is known as the Cordoban May.

A succession of festivities starts with the Cruces de mayo, continues with the concurso de patios and culminates with the feria.

The Málaga fair, a historic event

The origin of the Málaga fair has nothing to do with livestock fairs.

Its origin is the conquest of Málaga by the Catholic Monarchs.

The year 1482 marks the beginning of the military campaigns led by the Catholic Monarchs to put an end to the Muslim presence on the Iberian Peninsula.

At that time, Málaga was still part of the Muslim kingdom of Al-Andalus and was one of the most important capitals, thanks to its port.

But the capture of Málaga was not an easy conquest.

It required several attacks by the Christian troops over five months until the surrender of the Muslims on the 13th of August.

On the 19th of May 1487, the Catholic Monarchs entered the city, which they offered to the Virgin of Victory.

This event was commemorated in Málaga in 1491, with dates varying between the 15th and 19th of August.

A feria is much more than eating and drinking.

At the ferias, you eat and drink. A lot. Perhaps too much.

But this is not the only thing we do in such an event.

The commercial origins of ferias still survive today, so many companies also use the feria as an opportunity to meet with their customers and suppliers in a much more relaxed atmosphere.

They are also a perfect excuse to organise networking events, such as those AJE Málaga, the Young Entrepreneurs Association of Malaga has sometimes organised.

As well as business, the feria is an event that brings families together, from near and far.

So, if you’re in Spain this summer, visit one of its ferias, fiestas patronales or mayores.

I can assure you that you’ll have a great time!

And remember: when In Rome… 😉